Year 6 and The Ever Elusive Black Diamonds Appear

We have watered, weeded, pruned, applied hydrated lime, waited, watched, trained dogs and waited and watched some more.  Finally -- as predicted to happen between years 5 and 8, we found our first truffles.  Jumping up and down for excitement -- us and Friday!  It was Friday who found them all and the first one was laying on top of the ground
Just laying there!  I grabbed it up and sniffed - had to be the real thing.  Friday and I ran inside and showed it to Rick who promptly broke it in half and declared it to be a puff ball until we smelled the wonderful aroma.  It literally filled the room.  And the white veins throughout told us clearly it was a Black Winter Perigord Truffle!! No doubt!! 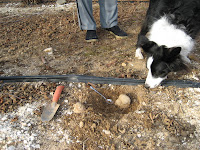 Friday was ready to hunt some more.  When we found the next one, it was about 2 inches underground.  He needed to take a closer look.  He looked like he was shocked that we had finally found what we'd been looking for all along.  Smart as he is, I think maybe he thought we were just playing a game.  That's his favorite pastime.  It's funny how a dog can make a game of work if he really wants to.  It was never a game to us but we do love hunting truffles with him.   Fortunately, unlike pigs, he never tried to eat them.  Just wanted to play! 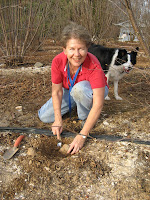 Here's a picture of me digging up just one of the 5 pounds or so we found during that first harvest season in the winter of 2006-07.  See that big smile?  It practically stayed on my face for the next 2 weeks at least!
We had done it!  We only knew of one other person in all of North Carolina who had produced truffles and that was Franklin Garland.  We were definitely the first in Stokes County and still are the only producing farm in this region.
We couldn't decide what to do with them.  We wanted to sell them but we also wanted to keep them.  What to do? 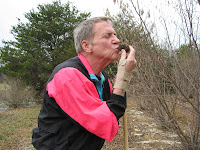 Rick's actions expressed it for us all.  Love those truffles!   It had been a long time coming but we hit pay dirt at last.  We started calling our friends and families to tell them the good news, too.  They had all been cheering for us and many of them had helped plant trees and shared our hopes and dreams about the truffle harvest.  Waiting is really the hardest part and we had waited a long time.  We did find evidence that some truffles had been there in 2005, however, and we just didn't find them.  No harm done, they deteriorated in the ground to inoculate the roots more.  We just didn't get to eat 'em when we found 'em.


Of course, we couldn't wait to share the news with our friends in Hillsborough so I called Betty Garland's cell phone and told her we had found our first truffles!  She was almost as excited as we were.  The date was November 25, 2006.  We took pictures and emailed them right away.  She agreed that we must have found our first treasures.  It was just like finding gold!


It was just like we thought it would be - maybe even better!  We may have been the only people in Stokes County eating (and giving thanks for) truffles for dinner that night!

And then, it got even better!  Stay tuned and Think Truffles!  The Best is Yet to Come!
Posted by Truffles NC

I appreciate comments and feedback and reserve the right to review all comments prior to posting them on the blog.
Thanks for visiting
Truffles NC!