The Wait for Truffles Continues

In the beginning, it seemed that there wasn't too much to do.  We were pretty proud of ourselves and thought this kind of farming just might suit us.
"Pride goeth before a fall" -- don't forget.

OK  Here we are at year 4 and let's review.  So far, we've replaced micro-sprinklers with drip irrigation, bought 3 tractors, gotten chummy with deer, moles, voles and rabbits.  We're thinking "What else could happen?  We just might have this thing under control."  And then the unthinkable happened -- disease!

Let's talk about Eastern Filbert Blight http://plantclinic.cornell.edu/FactSheets/easternfilbertblight/easternfilbertblight.htm and http://oregonstate.edu/dept/botany/epp/EFB/
Read to your heart's content (or, if you're a fellow truffle farmer, to your discontent.)  Study these websites and take their advice to heart.  There are treatment recommendations and everything you could ever want or need to know about EFB.


Here's one poor affected branch in our orchard 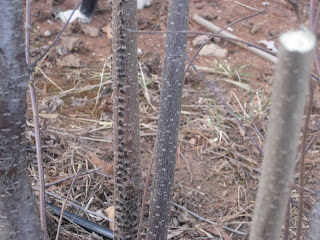 As the pictures found here and at the links above show, it appears on the branches of the trees as little rows of black dots.  It is not a seed borne illness but a fungus contracted from other trees in the woods around your orchard.  It really likes the kind of filbert trees we planted, a variety of coryllus avellana, and can spread like wildfire throughout the orchard.  We initially thought we could control it by judiciously pruning out every branch where the black dots appeared.  Wrong!!! You cannot control it that way -- EVER.  It grows beneath the bark of the tree and has been there for many months before you begin to see the outward signs.  You must spray to keep it from spreading!!! Period!!!  Once a tree has it, it's done.  You can only spray to keep other trees from getting it.

We tried for 2 years to manage it by pruning out the branches affected and burning them.  It will not work!!  All the members of NATGA www.trufflegrowers.com who wanted to come out and see the disease in action, were invited on a field trip out to our place on the afternoon of the annual meeting.  For them, our situation was an educational experience.  The advice we got from the expert from Oregon was -- "dig them up and start over."  You see, when you have a fungus growing above ground on a tree whose roots are inoculated with a fungus, it presents a unique situation and treatment options are limited.  We had to treat the fungus above ground being careful not to do it when the overspray could be on the ground and get rained on.  The active ingredient in the chemical we chose to use (read the websites for your options) is only active for 24-36 hours.  We mixed it with a surfactant to make sure it stuck to the branches and made sure the weather forecast was in our favor - sunshine only.  In Oregon, they just grow filberts for the nuts-- simple.  Not the same thing here.

We couldn't bear to dig them up so we pruned and sprayed for 2 more years.  In the meantime, before we got real familiar with  the EFB, we decided to plant 500 more trees.  (We actually planned to plant 1,000 more but decided we had better slow down.)  We cleared about 2.5 acres of partially sloping heavily forested land, dug a pond for irrigation (spring fed) and laid off the rows.  Another large experience with the learning curve for people who "don't know nothin' about farmin'."  Clearing the land and digging the pond (which quickly filled up with red silt that washed down the hill) wasn't -- in and of itself -- a bad idea.  It's just that we should have immediately planted grass to hold the red clay in place and establish some sort of erosion control mechanism.  Now, we know better. 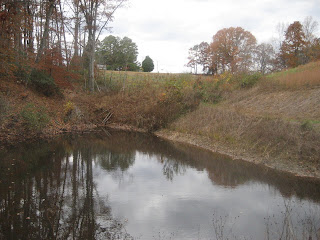 What we did, however, was to plant the 500 trees.  Poor things, they struggled to survive that first winter.  About 50 of them died or got washed down the hill.  There were gullies everywhere.  We were about ready to pull our hair out - and that's putting it mildly.  Fortunately, Franklin replaced the seedlings that didn't make it.  The county agriculture guy came and connected us with a program that helps with erosion control.  We got the grass planted and stabilized the orchard -- AND dug a new pond.   Drought weakened the trees and EFB traveled like wildfire.  The disease moved on into the new orchard -- more pruning and spraying.

Now, I ask you, do you think we're having fun yet?

Well, actually there was some fun on the way.  More about that next week.
Posted by Truffles NC No comments: Links to this post